Where to get a Dyson DC15 Wand Cable Retainer

Its been a good week for DC15 parts becoming available. Yesterday we reported on the DC15 wand collar now being available, and today we can report the long-awaited wand swivel clip is now available.

This part doesn’t have an ‘official’ name as Dyson never made it available as a part on its own.

I have heard it referred to as a retainer, winder, swivel clip, wand catch, wand clip or hook for the cord, flex, cable, wire or power lead.

Whatever you want to call it, it is located on the back of the wand handle to hold the power cord in place and it looks like this:

This clip is known to break on the DC15, and previously, buying a complete wand was the only way of getting one. They were an odd size, being smaller than the cable clips on other Dyson models of the early naughties era.

However, it was recently noticed that the grey cable catch from some later Dyson models was the same.

On a DC15 Ball, your old one will be white, yellow or lavender. The replacements are grey as you can see. They fit the following models:

So instead of your DC15 wand having a broken cord retainer looking like this: 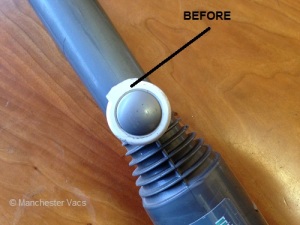 You can now pick up one of these and it will look like this: 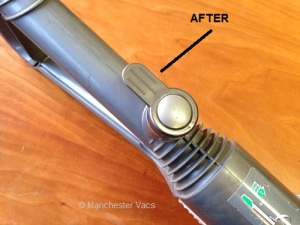 You re-use your old centre cap, internal spring and T15 screw that is under the cap. So don’t butcher the circular cap on your old one getting it out! A fine blade down the edge is all you need and you can pry it out.

As there are still plenty of DC15 ball machines still about in the UK, the United States and Australia, the availability of this little clip will help keep a few more on the road. Or the carpet…….

This entry was posted on Saturday, January 3rd, 2015 at 4:31 pm and is filed under Dyson DC15, Dyson Repair Guides. You can follow any responses to this entry through the RSS 2.0 feed. You can skip to the end and leave a response. Pinging is currently not allowed.