Review of the AM04 Dyson Hot Heater

I had wanted a Dyson AM04 Hot for some time. What put me off was the £200+ price tag for what is essentially a flashy fan heater.

Most online sellers are currently selling these for around £280 which is way too much money.

However, when one of the parts suppliers I use offered a (£230 inc. VAT) deal on these, I took the plunge and availed myself of a silver and blue one.

First impressions on taking it out of the box was that it is a bit plasticky. It doesn’t look over two hundred quidsworth, y’know?

I had read the Amazon reviews on this already, and many of them are not entirely favourable. Here are two examples:

This heater is well styled and easy to use but the heating element is underpowered. The power consumption is almost 2kW, but the heat output is so weak that I have switched back to my Halogen heater of 1.6kW as the latter will heat a room far more quickly than the Dyson AM04. I spent a lot of money on this heater and, as I have one of their vacuum cleaners which works very well, thought that this fan heater would be really effective too. I have tried different settings, changed rooms and kept it on for two or three hours but still very poor output.

For all of you that are ready to be fooled by this new high tech product, I make the following comments.
At 2.0 kW max output, the heater OUTPUT is the same as ANY electric heater rated at 2.0 kW.
As electric heat is 100% efficient (there are no system external losses), it can only add 2.0 kW of actual HEAT into your room.
In doing so it uses 2.0 kWh which is added onto your meter and your electric bill (at about 10p per kWh) – THE COST WILL BE THE SAME AS ANY OTHER 2.0 kW DOMESTIC ELECTRIC FAN HEATER.
Some of the ‘5 star’ reviews here are based on the Dyson heater being able to heat their room ‘super’ fast, as if this is somehow attributed to DYSON’s ‘special’ design. ANY cheap fan heater of the same power rating will have an identical effect on the room temperature.
I would suggest trying a cheaper £30.00 heater first (also available on AMAZON). You will get the exactly the same result and save yourself nearly £250.00.
Okay it may blow air around, but it WILL NOT not heat the room any faster.
It can’t and won’t miraculously add any ‘free’ heat to your room.
It may circulate the air around the room to create an even temperature – but so does ANY fan heater.
Any heat that is created by so called ‘inefficient’ motors used in more conventional fan heaters, also ends up in your room, so as there are no ‘external’ losses there is absolutely no difference to overall efficiency.
The fan motor power is normally very small when compared to the heater power anyway.
Also as claimed, it has ‘Powerful Cooling’ (I assume in fan only mode) and ‘cools’ better than other fans.
NO it doesn’t.
NO FAN cools simply by moving air. IT CAN NOT AND WILL NOT LOWER YOUR ROOM TEMPERATURE.
A fan moves air across your skin which causes faster evaporation of ‘moisture’ (sweat), which then cools you (latent heat of evaporation). The faster the air velocity, the faster the evaporation, the more latent heat is adsorbed.
If you don’t believe me, measure the inlet and outlet air temperatures through any room fan (or the DYSON) – they are equal.
THIS IS A VERY, VERY, EXPENSIVE GIMMICK SO DO NOT BE FOOLED BY TECHNICAL B.S. OR MISLEADING CLAIMS.

There are many similar reviews on Amazon and elsewhere.

However, I prefer to make up my own mind, and I wanted one to add to my menagerie of Dyson products in our home already. I like the design. If it was crap, I could send it back.

Having used it over the course of a few days I can relate what I now think of it. 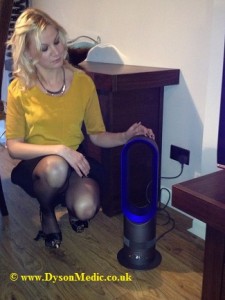 To call it a Dyson Hot is a little misleading.

Calling it a Dyson Warm might have been more appropriate.

When I first plugged it in and tried it, I thought it was faulty. An asthmatic waft of slightly warm air emanated from it. It didn’t seem to live up to its hype, and seemed to prove the many negative reviews correct.

However, before we dismiss it, lets look at what most people are going to actually use it for.

As with most people, we have central heating. We have an open fire too in the living room.

For us, this is not a primary room heater. It is a supplementary heater.

If I come in to a cold house, I will turn on the central heating. That might take an hour to begin to be felt. If I light the fire, that will also take a while to get properly warm. What the Dyson heater does is effectively bridge that gap by warming the room a little faster.

No, a large room (especially in an older house) will never be toasty warm with one of these. A small room might.

This thing will effectively and quickly take the chill of a large cold room until your other heating catches up. On a particularly cold day, it will supplement your existing heating if its not up to the job.

Does it do the job any better than a £20 fan heater from Argos might? Probably not. But it looks a hell of a lot better.

The magnetic remote control is a neat feature, and the oscillation feature and thermostatic control is nice too.

Is it worth the £200+ price tag? Purely as a heater, probably not. You can pay way less for something more effective.

You are paying the extra £200 for the badge and the design. That’s all. If that is worth doing is a matter of personal choice.

If your walls are papered in wood chip, and outside your door looks like a scene from Shameless, you have no need for a Dyson Hot. Get a twenty quid Argos special instead.

However, if design is important to you, and you want something in your home that not everyone else has, and if you have £200+ burning a hole in your pocket, then get one. It looks pretty slick, people will comment on it, and as a supplementary heater, it will do the job well enough.

This entry was posted on Tuesday, December 25th, 2012 at 4:00 pm and is filed under Dyson Fans and Heaters. You can follow any responses to this entry through the RSS 2.0 feed. You can skip to the end and leave a response. Pinging is currently not allowed.