The Slow Demise of the DC01 and the DC02

A few months ago, Dyson UK pulled all support for their first flagship models – the Dyson DC01 and the DC02.

The DC01 was the first model that Dyson produced in the UK. Launched in 1993, that makes early models now nineteen years old. That’s pretty old for a vacuum cleaner, but there are still untold thousands of them still in service today. The DC02 was Dyson’s first cylinder vacuum cleaner.

The DC01 was a particularly good seller in Scotland (no – I don’t know why either), perhaps it was the simplicity of the design and the no-nonsense engineering that appealed to canny Scots? The Scots love an invention: everything from penicillin to telephones to antiseptic was invented by a Scot.

Perusal of Dyson’s website tells us this about the DC01 and DC02:

Dyson machines are built to last. However, from the beginning of July 2011 we will no longer be able to supply spare parts, or carry out service or repairs for DC01 and DC02 machines.

As the owner of a DC01 or DC02, you can receive £100 off selected Dyson Ball™ vacuum cleaners, or £70 off selected other Dyson vacuums. We’ll also collect and recycle your old machine. 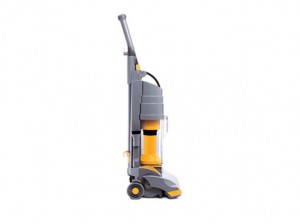 Well, much stuff is still available after-market. However, not everything is.

Industry watchers say this is because after-market parts are often made by the same factories overseas that make for Dyson. If Dyson cancel their orders, they demand the tooling be destroyed (because they paid for it and the factories still want to supply Dyson in the future so they comply) and the after-market cannot manufacture any more without making fresh tooling – which costs many thousands of pounds for each component.

It has been six months since Dyson withdrew support for the DC01 and DC02. We in the trade are now starting to see the effects. Stuff we are used to being able to source without difficulty is now going on backorder at the suppliers. Often, there are no due dates for fresh supplies. That usually means they are finished.

Up to now, the list is pretty short: DC01 fixed sole plates part number 900774-01 (not the one with the pivoting cradle – the other one) have already gone from the supply chain at the time of writing. I was told by the owner of Manchester Vacs – one of the the North’s largest independents – this week that they had sourced a few from around the trade and from overseas to meet demand and their waiting list and prices had doubled. They are down to their last handful. When they’re gone, they’re gone. They tell me their suppliers now all list this part as obsolete. They told me they will keep a waiting list from those who telephone them and serve them from used machines they get to dismantle as and when stock arrives. If you need one, get on that list!

New DC01 YDK motors (part number 911927-01) have also vanished in recent months. The Ametek ones (Part number 911928-01) are also unavailable and obsolete. As before, good used ones are starting to command a premium as that’s all that is available. The YDK ones are the lesser popular or the two types and are now commanding up to £30 for a good used one. Unthinkable a few short months ago!

DC02 white Antarctic Solo and De Stijl red handles are also obsolete; suppliers are still showing after-market grey ones (that will fit) in stock. Mint used ones in red or white are commanding a premium.

The DC02 motor 911929-01 is obsolete as well. However, a DC05 YDK motor can be shoehorned in there if you are determined enough.

Over the coming months, a lot of DC01 and DC02 parts will start to disappear. Manchester Vacs told me that they have spent thousands of pounds buying up almost every new DC01 and DC02 part they can find to ensure continuity of supply to their customers for as long as possible.

It is my prediction that in two years from now, the DC01 and the DC02 in good working order will be a rare thing. Grab one now if you want a piece of Britain’s domestic appliance history. Remember the Hoover Junior? Of course! We all do. Now, do you remember when you last actually saw one?

Comments and questions welcome as ever.

This entry was posted on Sunday, January 22nd, 2012 at 8:44 pm and is filed under Dyson Cylinders, Dyson DC01, Dyson DC02, Dyson News. You can follow any responses to this entry through the RSS 2.0 feed. You can skip to the end and leave a response. Pinging is currently not allowed.